The company LUNA PLAST a.s.
Established in 1994, LUNA PLAST a.s. began its activity in the Czech market as a manufacturer of protective PE pipes for cables and optical cables. Today, the company takes pride in offering a far broader product portfolio, with the production being primarily focused on PE pressure pipes for water, sewerage, gas and irrigation applications, geothermal probes, threaded PE pipes for non-pressure applications and PE fittings for pipe joining. The Company currently owns and operates state-of-the-art-equipment.

The use of our products is wide, especially for outdoor water, gas and sewerage, optical cable storage and utilities.

If you are interested in PE plastic pipes and connecting material, do not hesitate to contact us!

Situated at the confluence of the two largest Czech rivers, the Elbe and the Vltava, on the crossroads of histirical roads, this remarkable Czech town has a strategic position of only thirty kilometres to the north of Prague.
It is no wonder that remains of prehistoric settlements have been found here and the name of Melnik is mentioned in historical documents as ancient as the tenth century.
Melnik was the birthplace to St. Ludmila, the first Czech saint, and was a dowry town of Czech queens in the Middle Ages. At that time, extensive underground passages were opened in the sandstone subsoil under the town. They are presumed to have served to protect its inhabitants during wartime and to have been used for the maturing and storage of the high-quality Melnik wine. Later, the oldest wine school in Bohemia was founded here.
In the nineteenth century, paddle steamers began operating on the Elbe and the Vltava rivers, and a port and canal were built at Melnik.
In the twentieth century, chemical industry facilities, a shipyard, and a water power plant sprang up around the town. This created a great number of jobs and, in the 1980s, the town’s population exceedded twenty thousand. Nowadays, environmentally harmful operations are being phased out, new sales outlets are emerging, and many small and medium-sized businesses, which are environmentally friendly, have low own costs and quickly respond to market demands, are frounded. These include the modern and progressive LUNA PLAST a.s. 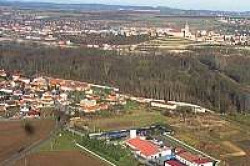 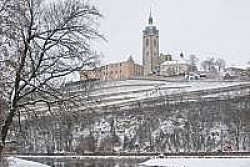 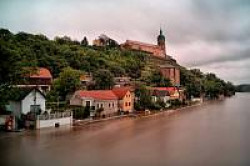